Hello lovely friends! Oh how I've missed you all.
Wanted to pop in and tell you I'm still here and have been stitching. Since my last post I told you we had a scare with my husband but all was clear that was early April. We were told soon after that they had seen something and he needed another test. Finally he had that done and again - HE's Clear!!! BUT my Aunt took a turn in her health. She is now terminally ill - she's my late moms only sister.
All the whole time I've poured my heart into my stitching. Stitching in hospital waiting rooms and home no matter where it helps me be calm.
On a much happier note - I started a new project. I have fallen in LOVE with Lavender and Lace & Mirabilia designs. I had some in my stash from years ago and even my mom had started picking them up for me when she had seen them. Funny thing is I purchased one that I had seen Carolyn Mazzeo stitch on Floss Tube and she stitched a conversion of it and that's what I've been stitching. 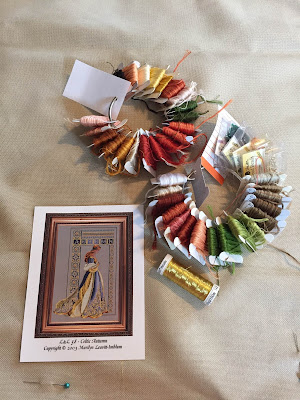 If you can see the photo of the chart its in tones of blues. The conversion I'm stitching is in tones of beautiful greens and ambers charted by Janet Granger. And I added her holding fall leaves (which was charted by Jennifer Janney).
There's tons of beading. I beaded some of the top rows and one finished square motif. Holding off on the rest till I get her all stitched. 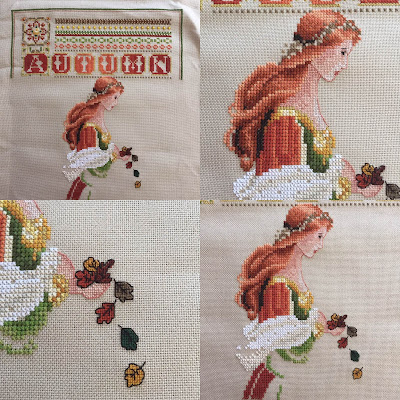 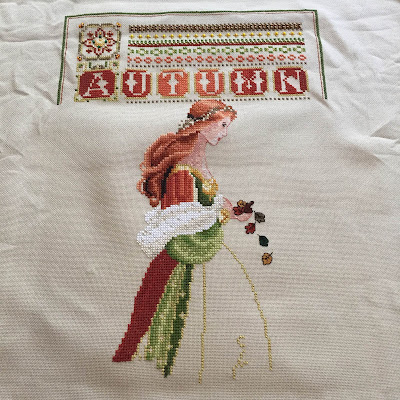 Progress as of today 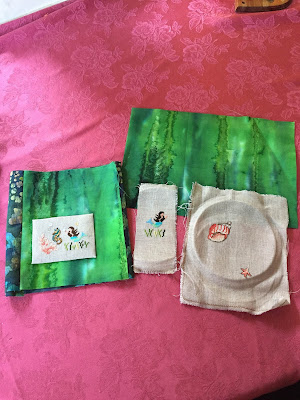 This is a project or WIP that I'm also working on a summer needlebook themed Mermaid/Sealife
The mermaids are charted by  "Maidens of the Sea" - With My Needle by the lovely Ellen Chester.
The Seahorse, seaweed & coral are charted in a book (I got from the library) - "Four Seasons in Cross Stitch by Janye Netley Mayhew & Nicki Wheeler.
I will try to post again soon - so much to share. At least I was able to get this posted - LOL!!!
Hope you all are stitching! With my Love and Appreciation - Annette
Posted by Annette-California at 2:43 AM 31 comments: