Hello beautiful friends! 4th of July is special because not only for celebrating Independence day here in the USA but also because its my sister's and Nannie's birthday. This was the first 4th of July not being with Nannie - ooooh how we miss her, we said a prayer for her that day. It was a day of remembrance, tears, and laughter all in one day. My son took it upon him self to organize a craft of making rockets. I placed them in a vintage Fenton vase that was gifted to us long ago from Nannie. We did have a make the best of it as we could. Didn't really see the fireworks but we should did hear them - no one wanted to go for a drive to watch them. Hope you got to see fireworks and had a good 4th of July.
I do have some stitching to share with you. 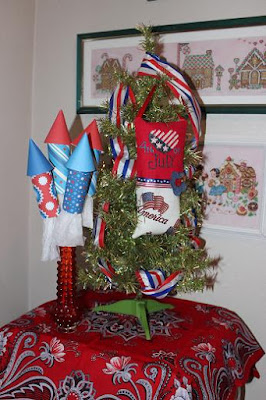 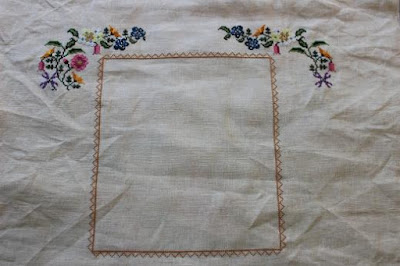 Progress as of oops sometime last week. I stitched some floral's in the upper right corner and the border. I was thrilled that the border matched up perfectly first time. The inside border is all done in closed herringbone stitches. 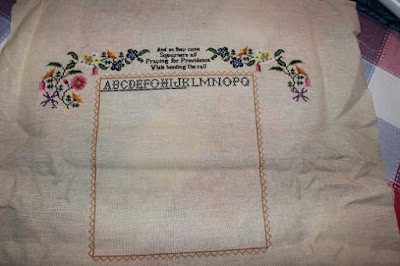 Progress of 7-6-2015, the poem is stitched one over one, first row of alphabet done and working on the band underneath. 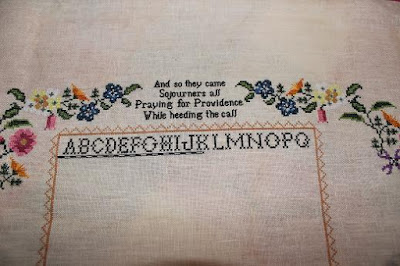 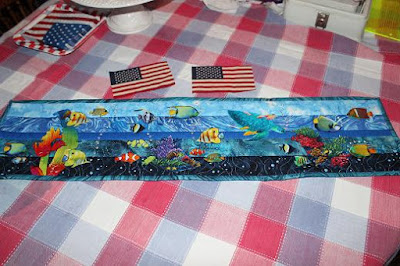 Completed "Under the Sea"! WOOHOO!!! I made the binding and added the pretty crystal's all today! Just in time for Shark Week (lots of special document series of sharks on the Discovery channel this week).
I took some close up photos hoping to show the pretty crystals as bubbles. 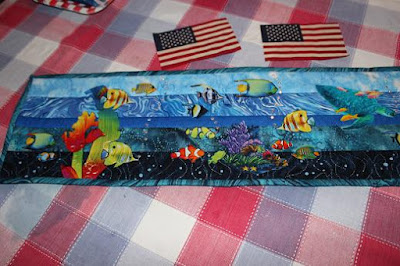 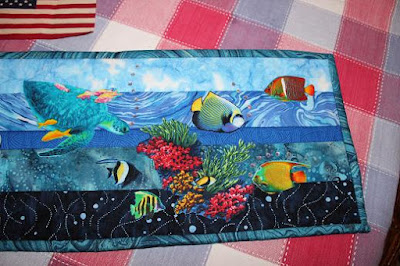 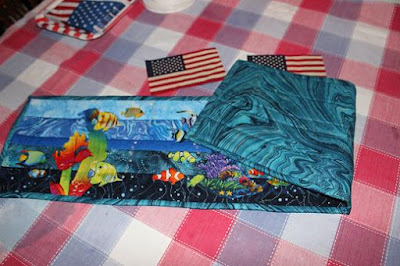 Thank you for stopping by. Always with my love and appreciation - Annette
Posted by Annette-California at 2:06 AM

Your WIP is beautiful!

Under the Sea turned out beautifully, Annette! Glad you had a nice holiday weekend--I'm sure there was a big void without your dear Nannie, though...

The first thing my eye was drawn to was Nicholas' rockets. They are cool!
Under the Sea is wonderful! You can keep the sharks! ;)

What a wonderful memorial for Nannie. How special. And your sampler looks GORGEOUS!!!

A bittersweet celebration for you this weekend Annette. I'm sure Nannie was with you in spirit. I love those rockets and your new start. And your quilt is absolutely beautiful!

Your wall hanging is beautiful Annette. Nice progress on your stitching. I love your display.

Love the paper rockets - so clever. Under the sea is something I could look at time and again and always see something new.

Know that this was a hard year for you without your Grandmother. How cool that she and your sister share the same birthday. Just think the whole country is celebrating on their birthdays.

Your WIP is so pretty--gorgeous colors!!!
You know I love those holiday trees!!! And the rockets are wonderful!!! Really cute!! They add a very festive touch!!!
Under the Sea is lovely, with those cool, relaxing colors.
It's so hard to have holidays without loved ones.....

Those rockets are cute!
Great progress on Sojourner, what a beautiful piece.
And Under The Sea is so darn cute and colorful.
You did a great job on it.
Happy B-Day to your sister and hope you had a good celebration for Nannie.
Marilyn

So so lovely! I just love how your Under the Sea looks. I saw a different row by row (that's what it's called, right?) from another quilt store and it's sooooo different. Also nice though. It's always hard to have the first of anything without someone. Hugs.

What a beautiful sampler this will be. You made great progress on it. And Congrats on finishing Under the Sea, it looks fantastic.

This fraud judgment has led to Antony Gordon’s Chapter Seven bankruptcy, which is a straight liquidation.