Happy New Year! Well I pulled out Ann Dale and started stitching on her again on the 31st of December. Seems like I'm in the stitching zone with Ann ever since I picked her up. Hard to put her down. 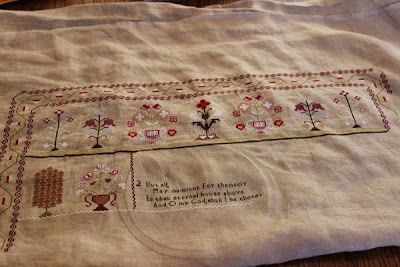 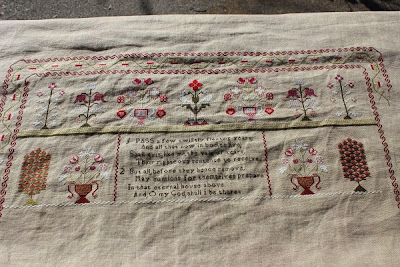 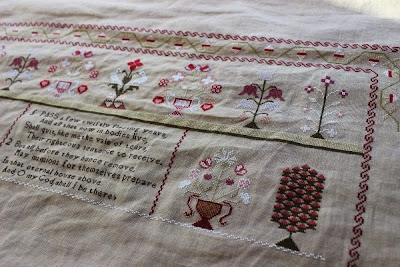 Finished center verse & Added: red border between verse and motif on right side, 2 motifs, bottom border all across under verse and motifs, lengthened red wave border on right side. I did iron my sampler before I took the photos. No wonder when a sampler is all stretched and framed it looks so much better. 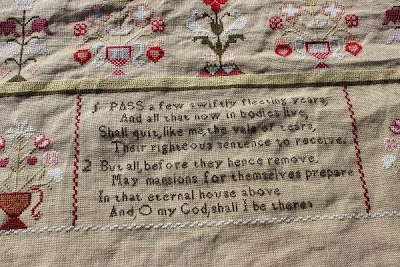 One over one on the center verse. I did tent stitches and not the full cross stitches on this part. And it was much easier to frog when I had to. 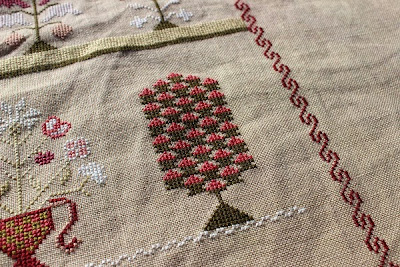 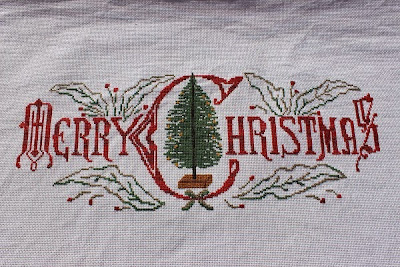 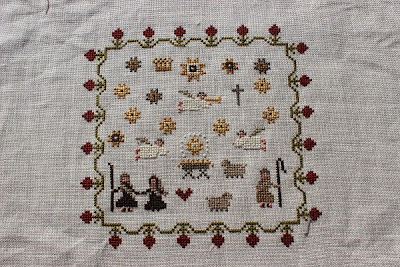 Overall I had 2 more finishes for 2013. Sorry if the photos seem dark. I actually dragged out my ironing board in the backyard and laid the samplers on top. The sun was out and shinning. Only problem (now that I discovered afterwards) was that I stood and photographed the samplers standing towards the sun. My eyes were dilated so at the time I thought I was doing a good job -LOL. Lesson learned. Next time I will have the sun behind me. I love seeing everyone's new starts for the new years. I do have lots of projects planned for 2014 but Ann Dale is making me happy right now stitching her.
With Love and Appreciation - Annette

Posted by Annette-California at 2:16 PM

You certainly got a lot done on your sampler. Congrats on your finishes! Nancy's charts are so nice! I started the border on Mary's Sampler but then it got put aside.

all so pretty. The victorian christmas is the best.

Wonderful progress on the sampler and the finishes.

Terrific progress! The Victorian Christmas is very, very nice.; different, I like it. Happy stitching into the new year. No new starts for me yet, several to finish first.

Congrats on both great finishes Annette. I love the Merry Christmas one. That sampler is stunning. Good job.

Ann Dale is just beautiful and you've made some good progress! It's nice to be in the stitching zone with a piece, isn't it. :) Love your other finishes too - pretty!

Great finishes. I think Ann Dale is so pretty. I love the color choices!

What a lot of beautiful stitching! I especially love All Dale - all those reds are sparkling!

Looking great Annette. I love it!

Hey Annette! Great progress on Ann. She is a pretty girl. Congratulations on the other finishes too!
Have a great week.

Happy New Year, Annette.
You had two very nice finishes to end the old year. And a wonderful project to stitch in the new year. Ann Dale looks gorgeous and I can easily see why she has caught your attention again.

Oh they are all so lovely! Feels so good to get those two done doesn't it?! Glad Ann is bringing you joy. =)

Ann is looking beautiful! Great job on the finishes as well : )

Your sampler looks great. I can't remember - did you win Merry Christmas in a giveaway from Nancy?

Congrats on your finishes and nice progress on the sampler.

How pretty, Annette!! Everything looks wonderful... You've had a very nice stitching year in 2013--wishing you all the best in 2014!

You go girl! You and Ann are making great progress. Love the other two finishes too. It always feels so good to get them done! Hugs

Congratulations on your finishes! The Victorian Motto is so pretty. Ann is going to be gorgeous, she already is!

Lovely finishes, Annette! And Ann Dale is coming along nicely, too.

Congrats on the finishes, and great going on Ann.

gorgeous finishing and progress. I was stitching on my Mary's Sampler today. I just have the border to work and then it's done.

Beautiful stitches ~ Ann is a stunner!